Down the DRAIN: California gets a jump on Delta tunnels

Posted on April 1, 2017 by UC Davis Center for Watershed Sciences The intake structure for the first Delta tunnel was completed and began to transport water this winter to the central Delta. Photo source: Gus Tolley

California took a step towards replumbing its archaic Delta water infrastructure by completing the first part of a contentious project. An intake for the first Delta tunnel was completed this fall, and with the return of wet weather, began transporting flows that will eventually bypass the Delta entirely.

Officially named the “Diversion Restoring Almonds Intake,” or DRAIN, the diversion intake conveys water into the central Delta to improve water quality and combat damage to water supplies and Delta ecosystems done by salt-water intrusion during the recent drought.

“The writing was on the wall for California’s big infrastructure projects,” said Rowe Foote, a legislative aide in the governor’s office. “The tunnels and the bullet train are our biggest goals. We need to get them done. We took a page from recent national election rhetoric: build now, get buy-in and pay later.” Since Californians have yet to approve full project funding, the first tunnel could only be partially completed using existing discretionary funds and a loan from Proposition 1 funds to improve access to south-of-Delta storage. Fiscal hawks in the governor’s office demanded that construction be limited to structures within the available budget, and that would provide on-going benefit regardless of whether future phases were ultimately approved.

The open bell-mouth DRAIN is unique for intake designs, and was selected because it physically limits diversions to surplus flows and can passively operate until future bonds and plans are approved. The passive structure means that intake flows will mimic the hydrograph, peaking when flows are high and receding as flows are low. Studies have shown that this kind of direct “functional flow” strategy helps preserve complex stream processes without overly complex interventions. 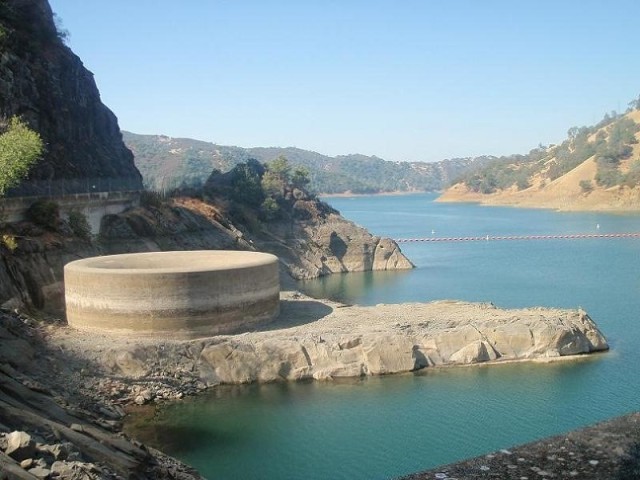 The impetus behind fast-tracking the DRAIN’s construction came when poor water quality for local Delta intakes coincided with increasing reports of marine animals in streams and canals. Sea lions have been reported in Knights Landing, Dixon, and Vacaville, and several reports of whales in the Sacramento River.

Spectators watch as one of two humpback whales partially surfaces near the Port of Sacramento. Image source: U.S. Coast Guard via EPA.

“Our environmental flow policy is barely enough to keep fish the size of Delta smelt in the right place,” said Chuck Laird, a spokesperson for the state’s Natural Resources Agency. “It’s really no surprise that with the amount of salt-water intrusion, we’re starting to see marine mammals in places that used to be reliably fresh water habitat.”

“While California’s drought may be easing, the environment has essentially been in a drought for decades,” said the Center for Watershed Sciences LeRoy Tempe. “Combine the salt-water intrusion with flow reversals from the Delta pumps, and you’ve got whales swimming into our rivers while [Delta] smelt and juvenile salmon don’t know which way to go.”

Delta flows are notoriously convoluted. It is the hub of California’s critical infrastructure, conveying fresh water from the wetter northern part of the state to farms and cities in the drier south. But tidal “sloshing” greatly exceeds Delta outflows: as a result, inland channels like the dredged Sacramento Deep Water Ship channel has extended tidal mixing, bringing salty, tidal water up the channel. Experts have long warned that fresh water to the environment has been under-allocated in the Delta, and that its ecosystem won’t recover until those flows are restored.

The DRAIN’s use will be limited until Phase 2 can be implemented: the construction of a device to Prevent/Limit Unnecessary Gushing (the PLUG) can be fitted to improve the reliability of water deliveries.

Nan W. Frobish is an occasional contributor to the California Waterblog and director of life enrichment for the UC Davis Center for Watershed Sciences. Dunlay J. Frobish performs multiphase fluid flow experiments throughout the Delta.

California WaterBlog. 2015. Q & A on survival of California’s Delta smelt.

13 Responses to Down the DRAIN: California gets a jump on Delta tunnels