Posted on September 1, 2017 by UC Davis Center for Watershed Sciences

Located in Harris County, Texas, Houston is the 4th most populous city in the US.  The flooding now unfolding in the Houston area is a human and economic disaster likely to rank with Hurricanes Katrina and Sandy among the worst in US history.  At the present moment, little quantitative information is available about the extent of flooding or economic damages.  The inundation is so widespread that detailed assessment has not yet been possible.  Even measurement of the flooding by visible-light based satellite has been impossible because the remnants of Hurricane Harvey have stalled over the Gulf Coast for the past week, dumping record precipitation and obscuring the skies from satellite view.

Our team in the Natural Hazards Research and Mitigation Group at the University of California, Davis conducted two sets of analyses to provide preliminary information on the pattern of flooding and to provide some context on historical flood damages in the Houston area.  Specifically, we:

(1) Processed radar data from the Sentinel-1A satellite from Aug. 29, at the peak of flooding in many areas.

(2) Analyzed data from the US National Flood Insurance Program (NFIP) to look at the nature and pattern of flood exposure in Harris County, including Houston.

The Sentinel-1 system, which consists of two satellites, was launched by the European Space Agency.  The Sentinel-1 satellites carry radar sensors, which can scan the surface at night and through cloud cover.  In addition, this radar imagery is sensitive to standing water, making it an ideal tool for mapping the extent (but not depth) of flood water covering an area.

A Sentinel-1 satellite passed over Houston on August 29, which we used to create a map that highlights water and flood inundation on the surface.  We overlaid the resulting map on flood-zone boundaries from FEMA’s National Flood Hazard Layer and on other geographical data. Finally, we further compared the surface water extent with known pre-storm extents by flood-zone in order to determine flooding extent in each area in the portion of the county we assessed.

The resulting inundation map shows the striking extent of flooding in Houston and provides context for the on-the-ground photos coming out of the area.  Reservoirs are overflowing, streams and rivers surging high over the surrounding floodplains, and highways and roads are now themselves rivers.

An image of the flood inundation map in Harris County, Texas, showing the flooding extent of Hurricane Harvey. Click to open and explore.

Table 1 shows the extent of flooding mapped by flood zones, as defined by FEMA.  The flooded area in square miles is not an accurate measure of total area underwater because image pixels with vegetation or buildings will not be classified as standing water.   For example, designated floodways (river channels, mostly) were certainly 100% full of water throughout the study area on 8/29, but the radar signal categorized only 30% of those pixels as water.  However, the distribution of water-designated pixels correctly illustrates the pattern of flood inundation.  In the future, we plan to create a raster map that shows the boundary between flooded and not-flooded land in Harris County, from which accurate total inundation areas can be calculated. 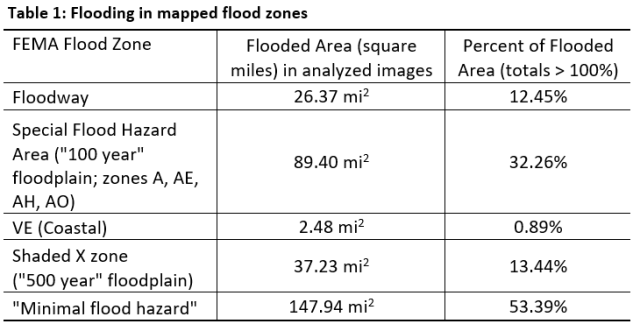 In Table 1, the percentages of total flooded area illustrate the great intensity of flooding resulting from Harvey.  About two-thirds of the inundation is outside of FEMA’s Special Flood Hazard Area, which is the so-called “100-year” floodplain, or area with a 1% or greater chance of flooding in any given year.  The 13.44% of inundation in the 500-year floodplain is very similar to the total portion of the study area in the mapped 500-year zone, suggesting that on average, flooding on Aug. 29 completely filled Harris County’s 500-year floodplain.  More than that; over 50% of estimated inundation occurred outside of any mapped flood zone.

History of Flood Damage and Exposure in Harris County

Texas has a long history of damaging flooding, and Houston has seen some of the worst of it, well before Harvey.  Since 1964, Harris County has had 27 federally declared disasters related to flooding and/or coastal storms.  We obtained databases of NFIP policies nationwide back to 1994 and insurance claims back to 1972.  For the analysis here, we identified current policies and past claims in the City of Houston, Harris County, and Texas as a whole.  We also examined repetitive flood losses.

As of June 30, 2017, Harris County policyholders held 249,212 NFIP flood insurance policies, covering $70.34 billion of assets, and generating $138.4 million in annual premiums. Over 40% of Texas NFIP policies are from Harris County.  Texas-wide, there are 593,115 policies in force, covering $161.2 billion, with $ 364.0 million in premiums.  Texas represents about 12% of NFIP policies nationwide and about 10% of annual premiums to NFIP.  Notably, and in contrast to the trend nationwide, the number of NFIP policies both in Harris County and in Texas has declined during the past several years (Figure 2).  Numbers of policies peaked in 2008 and have declined every year since that time.  This decline occurred despite several large floods in Texas during that time, which tend to sharply increase flood-insurance penetration in other areas of the country.  In addition, policy totals in Texas began declining well before Biggert-Waters 2012, federal legislation that raised NFIP premiums for some policyholders.

NFIP policies in force, by year, in Texas and in Harris County. 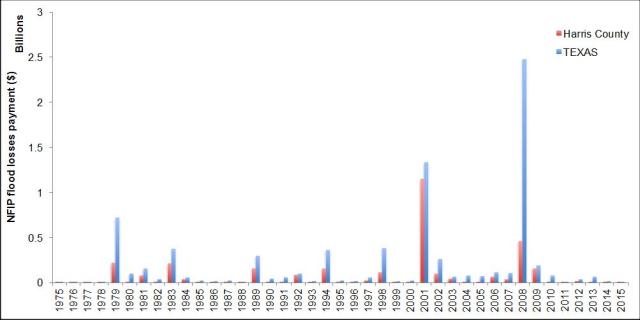 NFIP flood losses, by year, in Texas and in Harris County (in 2015 dollars).

In 1998, the National Wildlife Federation report, Higher Ground, identified a major challenge to the NFIP – policyholder who made flood claims again and again, with some of them receiving cumulative payments many times the structure’s value.  In 1998, the worst case was one home that was flooded 16 times.  Today, the largest number of claims on a single structure has risen to 40.  And Texas has a disproportionately large share of repetitive loss structures and losses.

FEMA maintains a list of properties flagged as Severe Repetitive Loss Properties (SRLPs); defined as those that have had at least four claims (each ≥$5000) or total claims exceeding the value of the structure.  Of about 30,000 designated SRLP properties across the US, 4889 are in Texas, the second highest of any state (after Louisiana).  SRL properties in Texas have received $962 million in NFIP payments, the 2nd highest of any state (after Louisiana).  It seems likely that Harvey will push Texas to #1.

We have also examined individual SRL properties, tabulating the worst of these in a variety of ways.  By counting the maximum number of paid claims, one property in Houston has been rebuilt at taxpayer expense 29 times.  We have also calculated total claims per property as a multiple of that structure’s value.  We tabulated the 30 largest of these ratios for single-family residential structures nationwide (structures valued <$10,000 excluded).  Harris County and Houston have 9 of these 30.  For example, one Houston-area home, valued at $116,335, has received NFIP payments totaling $1,848,916, or 15.9 times the structure’s value.  Other properties show even larger ratios.

There is room for some optimism in Texas.  FEMA provides funding to reduce long-term flood losses by mitigating individual properties, including acquiring and demolishing the most flood-prone structures.  In Harris County since 2000, 996 such properties have been acquired, at a cost of $63.5 million.  This optimism must be tempered, however, by the vastly greater pace of new construction in the Houston region.

The catastrophic flooding in the wake of Hurricane Harvey will certainly generate extensive discussion.  By some calculations, the current flooding represents the third “500-year” flood in the Houston area in the past three years.  Harris County flood managers have suggested that these extreme events represent rare, but plausible expressions of natural and stationary hydrology.  In contrast, credible counterarguments focus on climate-change tipping points as well as the rapid and extensive suburban development.  The catastrophic extent of current flooding in Texas points not only to a truly extreme event this year, but to a pervasive pattern of repetitive flooding. This pattern, in Texas and the Houston area in particular, points almost inescapably to local factors such as runaway development and lack of balanced hydrologic planning.  Recognition of these root causes is a vital first step in reshaping policies and guiding recovery in the wake of Harvey.

This entry was posted in Around the World, flood, Floodplains, Planning and Management, Tools and tagged Nicholas Pinter, Nick Santos, Rui Hui. Bookmark the permalink.