Posted on August 28, 2016 by UC Davis Center for Watershed Sciences 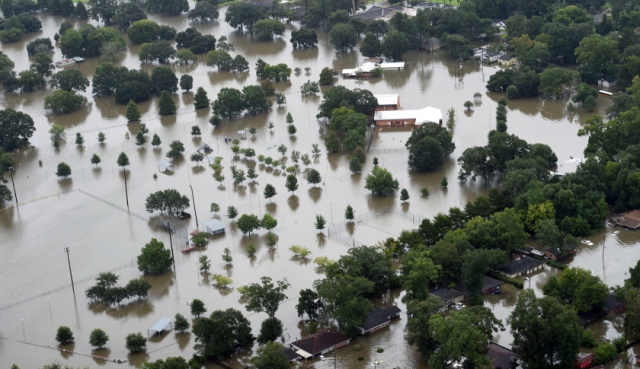 The flooding in Baton Rouge and surrounding areas of Louisiana is a major disaster, claiming an estimated 13 lives and displacing more than 100,000 people from their homes. The National Weather Service reported that rainfall in Louisiana this past week reached up to a 1000-year event (0.1% chance of occurring each year). The American Red Cross has called this the worst US disaster since Hurricane Sandy.

Our team of researchers in the Natural Hazards Research and Mitigation Group at the University of California, Davis undertook a preliminary analysis to determine extent of flood inundation during this recent event and its relationship with Louisiana’s history of major floods and development behind levees.

Louisiana has a long history 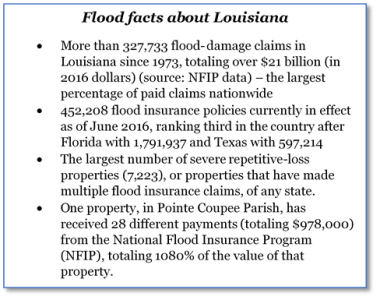 of disastrous flooding. In 1998, the National Wildlife Federation report Higher Ground ranked two of the parishes hard-hit by this week’s flooding, East Baton Rouge and St. Tammany Parish, 7th and 22nd among communities nationwide with the highest damages for repetitive-loss properties.  In 1998, there were 1,107 repetitive loss properties in these two parishes, resulting in claims to the NFIP totaling $47,534,736.  As of November 30, 2015, these two parishes were still in the top 25 severe repetitive loss properties (22nd and 5th respectively for payments received); NFIP claims total $117,131,310.

The National Flood Insurance Program (NFIP) was established in 1968 to curtail flood damages through nationwide mapping of flood hazard to guide sound floodplain management.  NFIP maps (“FIRMs”) are used to inform residents of potentially flood-prone land, guide development and construction ordinances, and to set insurance rates and requirements.  We analyzed the distribution of flood inundation around Baton Rouge in order to assess how well NFIP and FEMA maps provided guidance to avoid damages during the extreme and, arguably, unusual precipitation and flooding this past week.

One-third of the flooding we mapped was outside of FEMA’s designated 100-year flood zone, which is the “line in the sand” for floodplain management in the US.  Many floodplain residents and political leaders falsely believe that flooding cannot occur beyond the mapped 100-year line.  But nationwide, roughly 25% of NFIP flood-damage claims occur outside of 100-year zones.  This can result from drainage problems (as opposed to rivers going over their banks), because of levee failures, where local FEMA map panels are out of date, because climate change or basin development have worsened flooding, or simply because an area gets hit by an event larger the so-called 100-year storm (1% annual probability).  For all of these reasons, flood insurance can be a great deal and is highly recommended in many areas outside of FEMA mapped hazard areas, as events in Louisiana show.

Analysis of NFIP Policies and Past Claims in the Flooded Area

We obtained databases of NFIP policies back to 1994 and insurance claims nationwide back to 1972.  For the analysis here, we identified current policies and past claims for 19 communities in the flooded area near Baton Rouge that are part of the current Louisiana Presidential Disaster Declaration, e.g. communities in East Baton Rouge Parish and Livingston Parish. As of June 30, 2016, these communities have 54,644 NFIP policies-in-force covering around $12 billion in property, with those policy-holders paying about $40 million in annual premiums. The number of NFIP policies in these communities increased regularly from 1994 to 2014 (Figure 1), with a sharp increase following Hurricane Katrina in 2005.  The largest portion of this increase was for properties outside the mapped 100-year floodplain – property owners who bet wisely and are now facing a much more secure future than most of their neighbors. 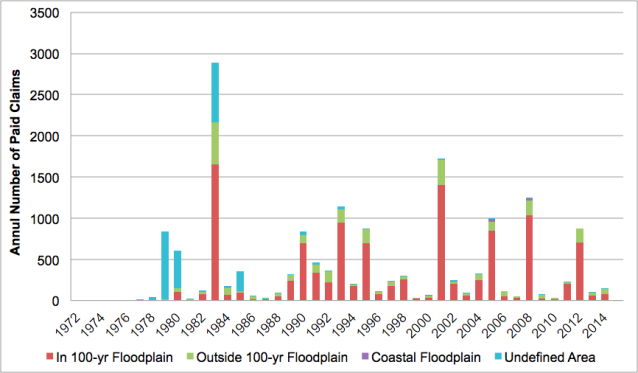 Using imagery from the European Space Agency’s Sentinel-2A satellite in the vicinity of Baton Rouge, Louisiana, we mapped flooding from the recent storm event (Figure 4).  While much of the area was still obscured by clouds on Aug. 14, East Baton Rouge and nearby communities were mostly clear.  About 30 square miles of flooded surface were mapped in the Baton Rouge area, which does not include additional flooding inside of buildings or in cloud-obscured locations. This flood inundation was overlain on FEMA’s National Flood Hazard Layer, which shows floodplains as identified on Flood Insurance Rate Maps, as well as the National Levee Database (NLD).

About two-thirds (66 percent) of the flooding detected from satellite imagery in the study area occurred inside of FEMA’s Special Flood Hazard Area (SFHA; Zones A and AE in Table 1), which is the regulatory standard in the US.  The SFHA aims to identify areas that would be inundated by the so-called 100-year flood event, meaning the flood that has a 1% chance or less of occurring in any given year.  Some FEMA maps also identify areas subject to larger 500-year floods (0.2% chance in any given year), and these areas around Baton Rouge also experienced extensive flood damages.  This is expected during such an extreme storm event, and serves as a reminder to residents and local leaders to remember flood hazard during the many years and even decades where mapped floodplain land may remain dry.  Even more importantly, flooding above the 100-year level is a harsh reminder to all of us – a rebuke to the US system in which development and construction can in many cases occur mere inches outside of the 100-year line.

The US Army Corps of Engineers National Levee Database (NLD) provides levee protection information for about 14% of the estimated 100,000 miles of levees in the United States.  We identified 147 mi2 of levee-protected area in our study area around Baton Rouge, but the majority of that area is west of the Mississippi River. Most of the studied area east of the Mississippi River lacked levees or else has levees that are not included in the NLD.

News reports from Louisiana include reports of breaches or overtopping of several levees by flood waters and in our analysis, we identified 11.5 square miles of flooding within levee-protected areas, mostly in East Baton Rouge. A well-known limitation in US flood-risk policy is that land behind levees certified and accredited as able to withstand 100-year or larger floods is written out of flood-hazard maps, but levees do not reduce flood risk completely. Residents and business owners behind any levee should look to Louisiana and remember that every levee carries a “residual risk” of failure or overtopping during an extreme event.  In some cases, levees even create their own flood risk, when drainage systems and pumps are overwhelmed by locally intense rainfall.  FEMA does not map for such “drainage flood”, and early reports indicate that this type of flooding was prevalent during this event in Baton Rouge.

There are numerous lessons to be learned from the recent flooding in Louisiana.  As evacuations and rescues turn towards flood recovery, careful research should target the distribution of flooding and flood damages.  In particular, the extent of inundation outside of mapped hazard zones should be studied in order to guide both recovery and future planning efforts.  Inundation outside of FEMA’s SFHA, or 100-year floodplains, may be attributed to the extreme intensity of this weather event.  But every 100-year or larger flood is an extreme event, and such “Act of God” explanations are too often used as an easy out that can serve to dodge systematic assessment of past planning and flood-risk enforcement and development.  Widespread flooding outside of mapped hazard zones can also reflect climate-driven shifts, land-surface changes that generate larger storm runoff, stream-channel modifications, overreliance on levees, or outdated maps (sometimes willfully delayed by local development interests).

In addition, our experience working with flood-impacted communities across the US and worldwide highlights that decisions made in Louisiana during the next few weeks can determine the region’s long-term future.  Key decisions will be made on whether to clean out the mud and rebuild in place or, instead, whether to mitigate – invest now in reducing future flood losses.  Homes can be elevated or flood-proofed, and the most flood-prone properties can be relocated to safer locations.  Research shows that each $1 invested in flood mitigation in the US returns an average of $4-5 in long-term savings.  And our experience is that the first weeks following a major flood disaster are a window of opportunity that soon closes.  Louisiana residents, disaster managers, and political leaders need to take a step back and look at the regional pattern of flood damages in this event and back through time.  Now is the opportunity to step off the path of repeated flood losses and instead make decisions that will move the region and its residents towards a more resilient future.

Map of Baton Rouge Flooding as of August 14th, 2016. https://watershed.ucdavis.edu/experiments/baton_rouge_2016/map