Posted on January 3, 2016 by UC Davis Center for Watershed Sciences

“One afternoon they take me … to witness a great religious ceremony. It is the invocation to the gods for rain.” John Wesley Powell (1895, p. 338)

2016 starts with slightly above average precipitation and snowpack and promising climatic conditions, but a long way to go…

California remains in a drought. Precipitation and snowpack are now near or a bit above average for this time of the water year (the 2016 Water Year began October 1, 2015). But precipitation is less than last year at this time in the northern Sierras (December 2014 was unusually wet here, followed by more than unusually dry).  Are the wet promises of ENSO coming true? Year 2016 drought conditions are likely to remain unclear until March – no matter how eager we are to know right now.

The California Department of Water Resources’ California Data Exchange Center (CDEC) does a great job assembling data that give insights on water conditions. They update these every day at http://cdec.water.ca.gov. There is too much to digest, but please gorge on and explore the data anyway – it is good for you.  I’ve included links below for your indulgence.

Here are some highlights.

Most major reservoirs in California have less storage than at this time last year.  Groundwater is mostly at record low levels. But some refilling is occurring with the onset of the wet season. Folsom Lake is recovering a bit from its lowest water levels ever.

Overall, California has about 2 maf less water in surface storage than last year’s generally low levels at this time, and, reflecting four years of drought, we are now about 8 maf less than average for this time of year.

Groundwater statewide is down about 6.5 maf from last year’s levels at this time, and about 14 maf or more from pre-drought conditions.

The drought so far has depleted total storage in California by about 22 maf cumulatively, or nearly a year’s worth of water use in agriculture. Soil moisture conditions were also unusually dry from 2015. DWR does not yet publish statewide estimates on groundwater or soil moisture storage conditions.

A nice feature of the CDEC precipitation plots is that for more recent years the data are daily so you can see each storm coming in, and how much it contributed to annual water supply. The difference between a drought and a wet year is just a few storms, the size of a few storms, and where those storms drop moisture.

Is it El Nino yet?   Despite extraordinarily strong El Nino conditions in the ocean, the Great Wet Hope has not yet arrived in a big way for most of California. But we still have time to hope and the early January forecast and conditions look promising. 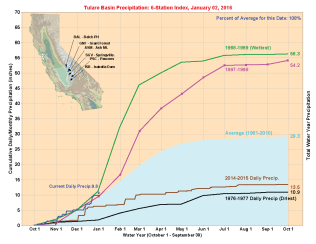 It is too early to tell. Keep an umbrella handy, but the drought isn’t over.

As John Wesley Powell observed, we always hope for rain (and snow) in this dry land in ways that comfort us, even irrationally.

Ending with a cheery thought from NOAA: 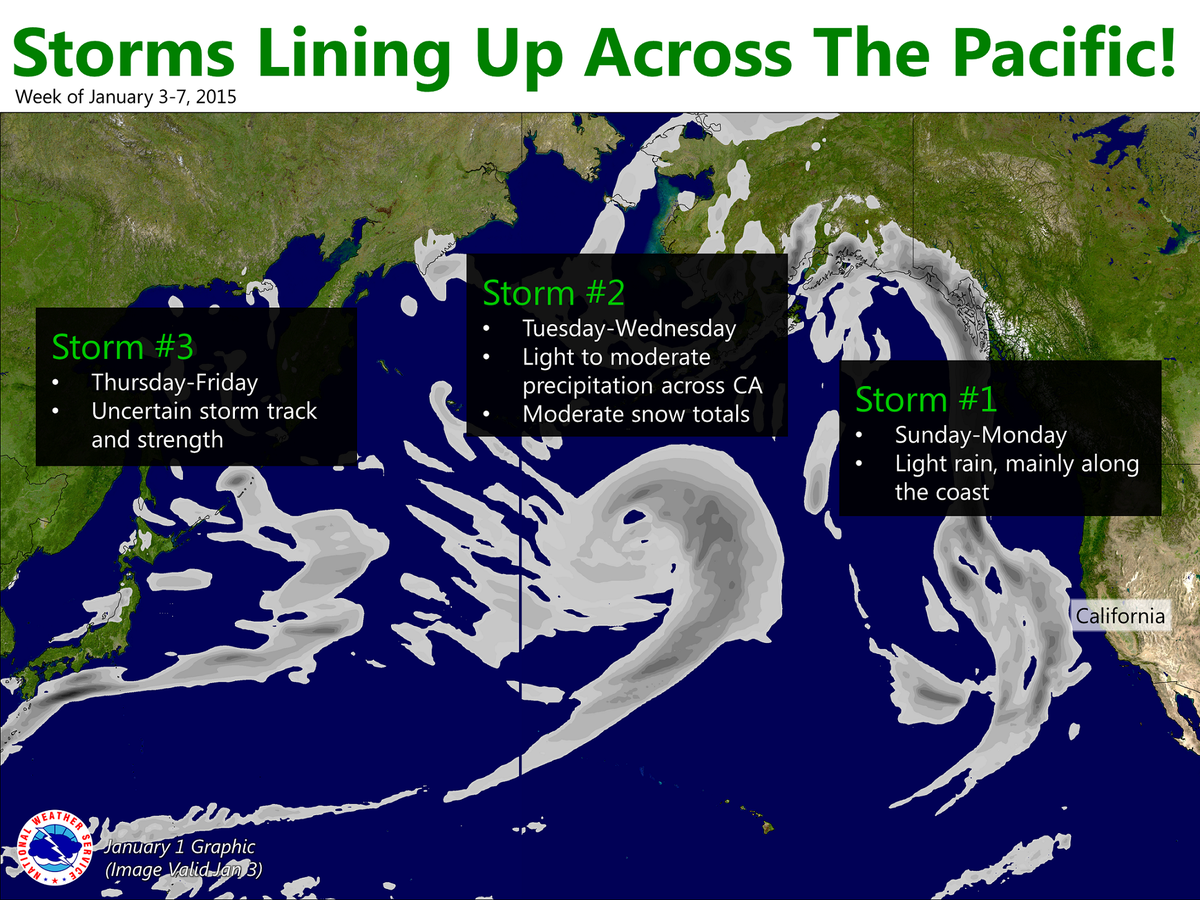 https://californiawaterblog.com/2014/06/15/will-californias-drought-extend-into-2015/ (Some historical statistics on how likely it is to be wet following a critically dry year.)

This entry was posted in Uncategorized and tagged Jay Lund. Bookmark the permalink.