Some of the most popular drought stories lately have been on the amount of what water needed to produce food from California, as a consumer sees it — a single almond, a head of lettuce or a glass of wine. The stories are often illustrated with pictures of common fruits, nuts and vegetables in one column and icons of gallon water jugs representing their water usage in the other.

But there are more than two columns to this story. The amount of water applied to crops also translates into dollars and jobs — the main reasons for agriculture’s existence in California.

Here are multiple columns of data to better understand California’s crop water use and the revenues and jobs it is intended to produce.

The charts below illustrate the data. A principal conclusion is that crops with the highest economic “pop per drop” — revenue per net unit of water — also usually have the highest employment per land area and water use. 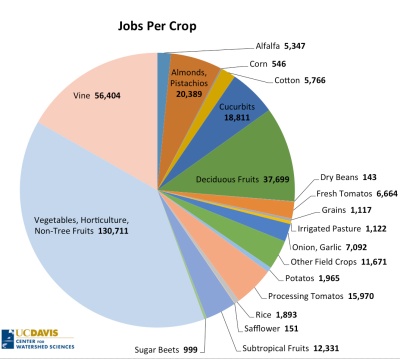 Other observations from the data:

California agriculture will use less water this year and in the long run. Several factors will lead to long-term reductions in farm water use in many areas of the state. Those include the state’s new groundwater legislation, ongoing salinization and urbanization of cropland, and increasing environmental water requirements.

The drought has raised understanding of these inevitable reductions. But the growing market value of California’s specialty crops and growing yields per acre and per gallon will keep California agriculture healthy in most cases.

Growing scarcity of water for agriculture is probably best managed using water markets and pricing so the industry and the state can make the most of limited supplies. Efforts to impose detailed arbitrary limits on crops and regions are unlikely to serve the economic and environmental interests of California, but rather distract from discussions needed for long-term progress.

Josué Medellín-Azuara, Jay Lund and Richard Howitt are with the UC Davis Center for Watershed Sciences. Medellín-Azuara is a research scientist, Howitt is a professor emeritus of agricultural and resource economics, and Lund is a professor of civil and environmental engineering and director of the center.