Making water for the environment count in an era of change: Cautionary tales from Australia

Posted on December 17, 2017 by UC Davis Center for Watershed Sciences 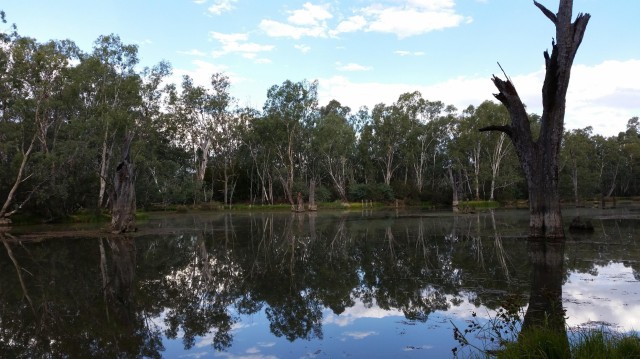 Floodplain forests of the Ovens River near its intersection with the River Murray, Australia. © J Pittock 2017

The specter of California drought looming again on the horizon gives renewed urgency for water policy and management reforms. Recent discussions reflect a growing recognition that our future depends on us making water count for both humans and the environment. For much of our state’s history, water has counted primarily in its capacity to supply water for cities and agriculture. Continued declines in California’s freshwater ecosystems and new and amplified threats under climate change make it clear additional reform is needed to maintain the character, functions and services of our riverine landscapes.

Sustaining California’s native freshwater ecosystems has been a persistent challenge even under the best of conditions, and in an era of climate change, compounding factors expand this challenge. These issues are addressed in a recent Public Policy Institute of California report, which identifies needs for reforms to improve water accounting for environmental purposes, develop watershed-level plans, and establish ecosystem water budgets.

Efficient and effective strategies to establish and implement needed reforms such as these can be found in other systems, as managing water for the environment is a global challenge. And, places similar to California – defined by scarce and variable supply, high demand, and a large diversified economy – are more likely to provide useful insights. With comprehensive water reform currently underway, Australia’s Murray-Darling Basin offers just such an opportunity. 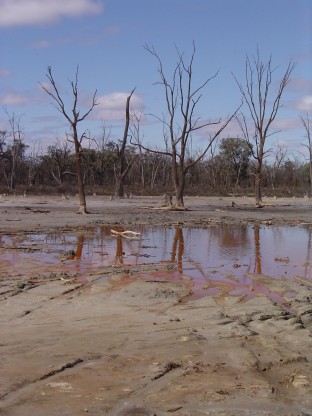 The Murray-Darling Basin shares many physical and socio-economic characteristics with California’s Sacramento-San Joaquin Basin. Both climates are highly variable, dominated by cool, wet winters and warm, dry summers and marked by severe droughts and floods. Water availability is often out of sync with when it is needed for agriculture, resulting in extensive water supply infrastructure to store and move water. Irrigated agriculture dominates water usage, and both the Murray-Darling and Sacramento-San Joaquin Basins are often referred to as the “food baskets” of their nations. Also common to these systems is extensive ecosystem degradation, marked by native species declines.

Profound vulnerabilities were revealed during recent droughts, Australia’s Millennium Drought and California’s 2012-2016 drought. Rising temperatures, overall reduced water availability, and greater extremes under climate change place additional pressure on the physical and political capacity of these systems to reliably supply water for humans and the environment.

Australia’s current water reform process is one of the most ambitious globally on several fronts, including its limitations on consumptive water use, establishment of water markets, and large-scale comprehensive planning and management framework across multiple levels of government (Grafton et al. 2016, Hart 2016). A fundamental principle is that freshwater ecosystems are legitimate “users” of water. Under the 2007 Water Act, the Murray-Darling Basin Authority was established and charged with creating a plan for a “healthy working river.” After a contentious drafting process, the Murray-Darling Basin Plan became law in late 2012 with nearly complete implementation by 2019. As the Plan moves from planning to implementation phases, a number of issues have arisen that hinder progress and chances for success, especially under climate change (Hart 2016, Pittock et al. 2015, Wentworth Group of Concerned Scientists 2017).

What follows are cautionary points developed through conversations with Australian researchers as well as from published literature concerning water management in the Murray-Darling Basin. These build on four general lessons for California previously identified by the Public Policy Institute of California based on environmental water reforms in Victoria, Australia, a state covering part of the Murray-Darling Basin: 1) Plan prior to droughts, 2) Support strong federal and state partnerships, 3) Establish water rights for the environment and allow trading, and 4) Give the environment equal priority among other water users (Mount et al. 2016). As California looks to these guiding principles in the context of its own unique socio-economic and environmental conditions, addressing the following points should improve chances for success:

As the implementation of water reforms in the Murray-Darling Basin reveals these and other challenges, it would be wise to take note as California continues with water reforms to make water for the environment count in an era of change.

Alison Whipple is a PhD Candidate in Hydrologic Sciences at UC Davis and affiliated with the Center for Watershed Sciences.

This work and my recent trip as a visiting researcher in Australia were made possible by the National Science Foundation under IGERT Award #DGE-1069333, Climate Change, Water, and Society at UC Davis and the Delta Stewardship Council Delta Science Program under Grant No. 2271. The contents of this material do not necessarily reflect the views and policies of the Delta Stewardship Council, nor does mention of trade names or commercial products constitute endorsement or recommendation for use. Any opinion, findings, and conclusions or recommendations expressed in this material are those of the author and do not necessarily reflect the views of the Delta Stewardship Council or the National Science Foundation.

I thank the many researchers who generously shared their time and insights, helping untangle the story of where the Murray-Darling Basin Plan is now and where it is going to sustain healthy ecosystems into the future. Special thanks to Associate Professor Jamie Pittock and Professor Stuart Bunn for hosting my visits at the Australian National University’s Fenner School and Griffith University’s Australian Rivers Institute.

Horne, A. C., J. A. Webb, M. J. Stewardson, B. D. Richter, and M. Acreman. 2017. Water for the Environment: from Policy and Science to Implementation and Management. Elsevier, Cambridge, MA.

This entry was posted in Around the World, Climate Change, Planning and Management, Sustainability and tagged Alison Whipple. Bookmark the permalink.

1 Response to Making water for the environment count in an era of change: Cautionary tales from Australia