Fish, flows, and 5937 – legal challenges on the Santa Maria River

Posted on July 30, 2017 by UC Davis Center for Watershed Sciences

Santa Maria River as seen from a bike trail on the Santa Barbara County side, with the 101 Freeway bridge visible. Image source: Wikipedia

Driving down the 101, you cross a half-mile long bridge over the Santa Maria River into the city of Santa Maria, California. It’s a large bridge, with big levees to constrain the river on either end. But the Santa Maria River, like many southern California rivers, is dry throughout much of the year and has been for at least of part of every year on record. On average, the wide, sandy channel is dry over 90% of the time. Some dry periods stretch up to three years.

So why the big bridge?

The Santa Maria River watershed supports one of four key populations of federally endangered southern California steelhead that, according to the National Marine Fisheries Service, is essential for their recovery. Although these fish often go unnoticed, they are at the center of a pending lawsuit that focuses on ensuring dam operations comply with California Fish and Game Code Section 5937, which requires dam operators to keep fish downstream of a dam in good condition. If the lawsuit succeeds, minor changes in dam operation may produce significant improvements in wild steelhead populations.

The Santa Maria watershed covers 1,880 square miles (1.2 million acres), making it one of the largest coastal watersheds in the state. The Santa Maria forms at the junction of two rivers, the Cuyama and the Sisquoc. The Twitchell Dam blocks the Cuyama River just a few miles upstream from the junction, while the Sisquoc River flows unimpeded from its headwaters in the Los Padres National Forest. The national forest dominates the watershed, and most of the mountainous higher reaches of the watershed do little to slow runoff during rare rain events.

Although the watershed averages only 15 inches of rain per year, when rain does fall, much of the rain reaches the Santa Maria River quickly, transforming the dry riverbed to a raging mix of muddy water. Prior to construction of the large levee system, these floodwaters regularly inundated the city of Santa Maria, transforming the city streets into the canals of Venice.

Flooding during a 1913 storm in the City of Santa Maria. Santa Maria flooded on a regular basis before the levee system was built. Image source: Santa Maria Historical Museum

This is an incredible river system: from year to year, it ranges from desert to flood, with little in between. Nevertheless, its groundwater supplies water to the city of Santa Maria and helps support annual agricultural production in Santa Barbara County of roughly $1.4 Billion. Incredibly, it also supports a vital population of the federally endangered southern California steelhead.

How do steelhead, which by definition require outmigration to the ocean followed by eventual return migration to their birth stream to spawn, survive in a river system that almost never flows to the ocean? Both the adult steelhead migration and the smolt outmigration depend on precise flow conditions, and these conditions are rarely met. Historically, 80% of monitored years failed to provide opportunities for adult steelhead to migrate upstream, and 75% of monitored years failed to provide opportunities for smolt outmigration. Still, in spite of these historical impediments to passage, the steelhead were once one of the most common fish in the Santa Maria system, and the Santa Maria run was the second largest in Southern California. 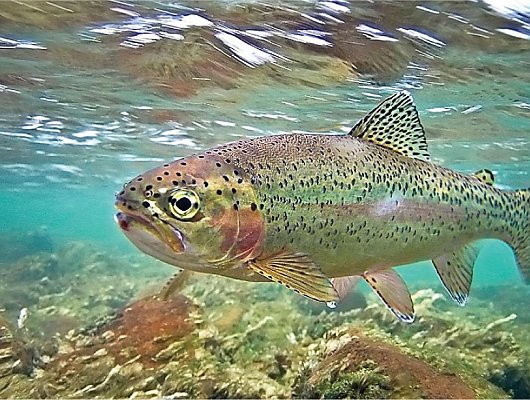 These adaptations, coupled with additional adaptations to higher temperatures and other local conditions, have enabled the historic persistence of this steelhead population. But the establishment of the Twitchell Dam on the Cuyama River in 1958 started the steelhead on a long decline, and now they hang on by a thread. The dam stores as much of the winter and spring flow of the Cuyama River as possible, then slowly releases the water during the summer months in an effort to ensure that all of the water from the Cuyama goes into groundwater and never makes it to the sea. Although the steelhead never made much use of the Cuyama River itself, the flow changes have altered the flow regime on the Santa Maria in several important ways, most notably by reducing the total number of up- or downstream migration opportunities and by increasing “false positives,” flows in the Sisquoc that induce migration without any chance of letting fish make it through the Santa Maria River alive. These changes have decimated the steelhead population.

Twitchell Dam on the Cuyama River, a tributary of the Santa Maria River. Image source: USBR

California law prohibits operation of a dam in this way. California Fish and Game Code Section 5937 requires “ The owner of any dam shall . . .  allow sufficient water to pass over, around or through the dam, to keep in good condition any fish that may be planted or exist below the dam.” Under California Fish and Game Code Section 5900, the term “Owner” includes the United States . . . , the State, a person, political subdivision, or district (other than a fish and game district) owning, controlling or operating a dam or pipe. The state of California has generally failed to enforce 5937, leaving enforcement to private nongovernmental organizations like California Trout or the Natural Resources Defense Council. In the most recent 5937 lawsuit, the Environmental Defense Center, representing Los Padres Forest Watch, and Lawyers for Clean Water, Inc., representing San Luis Obispo Coastkeeper, filed suit against the Santa Maria Valley Water Conservation District, which operates Twitchell Dam. The lawsuit seeks a court order requiring the water district to comply with Section 5937 by releasing water to support additional steelhead migration.

As in many water disputes, the issue is less the total amount of water and more the timing of releases. Both an independent report and the experts supporting Los Padres Forest Watch and San Luis Obispo Coastkeeper estimate that the steelhead need only 2-4% of the water stored annually by Twitchell Dam released strategically during flow events that would otherwise almost, but not quite, support steelhead runs. As required by 5937, smarter water management can save these steelhead. At this point, whether that happens is up to the Water District and the Court.

Karrigan Bork is a Visiting Assistant Professor with a joint appointment at the McGeorge School of Law and the Dept. of Geological & Environmental Sciences, both part of the University of the Pacific. His research interests include environmental law, natural resources law, international law, and administrative law, focusing on the interplay of science and law. He is currently serving as a consultant to Lawyers for Clean Water, Inc., in the lawsuit discussed here.

This entry was posted in California Water, Fish, Groundwater, Planning and Management, Sustainability and tagged Karrigan Bork. Bookmark the permalink.

3 Responses to Fish, flows, and 5937 – legal challenges on the Santa Maria River