Posted on June 4, 2017 by UC Davis Center for Watershed Sciences

This view of a duck hunting club in Suisun Marsh shows both a highly modified environment and reflects its potential for being managed as a reconciled ecosystem. Photo by P Moyle.

by John Durand and Peter Moyle

Returning open tidal exchange to diked lands is a primary goal of Delta restoration, driven by the 2008 Biological Opinion from USFWS. This document requires 8000 acres of tidal and subtidal habitat to be created. California EcoRestore is coordinating with state and federal agencies to restore at least 30,000 acres, much of which will be tidal or subtidal.

Evidence from newly created tidal wetlands, however, does not support the basic concept behind these restoration actions: that dikes can be breached and then left alone, to create tidal habitat with high benefits to endangered fishes.  Our research shows that simply re-creating tidal flow alone will not provide habitat and food for delta smelt, juvenile salmon or other native fishes. An example of an early tidal wetland project in Suisun Marsh is the Blacklock Restoring Marsh, a former duck club located in Suisun Marsh, which was opened to full tidal exchange in 2006, when its dikes were breached.

We studied the water quality, food production and fish community at Blacklock from October 2013 to June 2015. During that period, Blacklock consistently underperformed adjacent tidal sloughs and managed wetlands. For example, its chlorophyll production, a measure of potential food web supply for native fishes, was generally low. In contrast, we found much higher high chlorophyll production in a nearby managed wetland (Luco Pond) and dead-end sloughs that were sampled concurrently.

Heat map showing the distribution of chlorophyll-a concentrations across the northwest region of Suisun Marsh during 2014 and 2015. A) Spring series of measurements, February-June; B) Fall series, October-November. Blacklock Marsh is shown in the box.

Likewise, zooplankton, the main food source for pelagic fishes like smelt, or larval fishes of all species, were in low abundance in Blacklock Marsh but high in our other sites, particularly Luco Pond.

Zooplankton densities, stacked by species, in three nearby habitats of the northwest Suisun Marsh. Note that the scale for Luco Pond is different, due to the high concentration of zooplankton found there.

Fish community composition and abundance was also poor for Blacklock when compared to adjacent sites. Catch in Blacklock was dominated by non-native fishes, including Mississippi Silversides, an invasive fish that feeds on eggs and larvae of native species. Adjacent sites had larger catches of native Sacramento Splittail (a species of special concern) and Tule Perch.

Data from trawl sampling of fish in Blacklock waterways. Blacklock was dominated by non-native fishes, including the invasive Mississippi Silversides, and had the lowest species diversity of any of the sites.

Why does a recommended restoration action not work on Blacklock Marsh? Likely, the biological opinion overstates the importance of tidal restoration to Delta Smelt. There remains no direct evidence that wetlands will directly benefit smelt. Although the San Francisco Estuary was dominated by tidal wetlands before the mid-1800s, today’s Bay-Delta is a very different place. Restoration based upon historical conditions will not provide the same benefits as they did over 100 years ago. For more insight as to why this might be the case, please refer to our earlier blog, Reconciling conservation and human use in the Delta.

In order to reap the benefits of tidal restoration, active management is required. Just as we actively manage the flow of water across the Delta for water supply, so we need to manage for desired ecosystem benefits. Managed wetlands, like Luco Pond, Wings Landing, and many others throughout Suisun Marsh, often provide important benefits to aquatic species, in addition to providing food and habitat for waterfowl.

In order to make Blacklock Restoring Marsh more beneficial for desirable aquatic organisms, it must be re-engineered. Currently a warm shallow pond sits in the middle of the site, providing silverside habitat. This should be removed by grading or aggrading, combined with emergent vegetation replanting. The two breaches that allow tidal exchange should be hydrodynamically separated by a levee, and the perimeter ditch should be made continuous to allow water circulation. 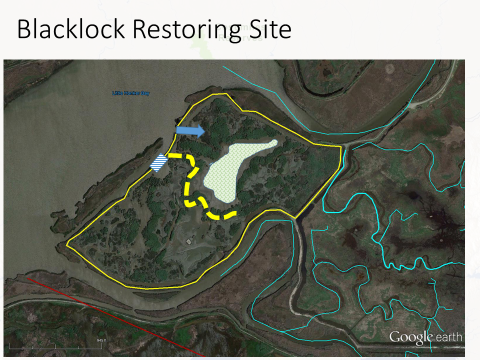 Although this recommendation contradicts the USFWS biological opinion, our research supports gating at least one of the breaches (and preferably both) to control the flow of water across the site, allowing management of phytoplankton and zooplankton production rates, as well as access by invasive organisms. Such control would allow two additional benefits: 1) experimental manipulation to understand how the site responds to different flow strategies; and 2) the ability to drain the site if it becomes infested with undesirable organisms, an ongoing problem to restoration in the San Francisco Estuary.

Finally, connecting the perimeter ditch with slough channels to the southwest of Blacklock would increase the slough length relative to the tidal excursion ratio and would also allow upslope ephemeral creeks to periodically introduce sediment, nutrients and organic carbon, all of which promote native fish habitat and food production. The Department of Water Resources has already purchased the property; we look forward to working with them to integrate the landscape in a more integrated and functional way.

Breach-and-leave is no panacea for real, thoughtful restoration. While we do not fully understand the novel ecosystem that has been inadvertently created in the San Francisco Estuary over the last 150 years, we know enough to realize that a collection of small tidal marshes with breached levees, sprinkled across the landscape, will not create desirable outcomes. We should implement restoration in a careful way, using experimental practices that allow us to study, reverse, and redesign as needed to create the habitats that are demanded by various stakeholders, whether to benefit fish, water delivery, elevation reversal, water quality, or recreational opportunities.  In a complex estuary, one size does not fit all.