Posted on November 29, 2015 by UC Davis Center for Watershed Sciences

The much-anticipated El Niño has now arrived, with increased potential for heavy rain and snowfall, including the possibility of localized flooding, mudslides and other hazards.

While extreme storms, flooding and other natural disasters challenge society to protect life and property from damage, they also present opportunities. Floods in particular often catalyze positive changes that otherwise would not occur. These events give us a chance to fix past oversights, correct imbalances between human use of the landscape and natural processes, and improve long-term resilience for people and society.

People across California are speculating about what El Niño might bring. One recent opinion article in the San Jose Mercury News warned of floods 0f possibly “biblical proportions.”

Concern is warranted, but flooding in California is not clearly or simply correlated with El Niño – particularly not in Northern California, which receives most of the state’s rain and snow. 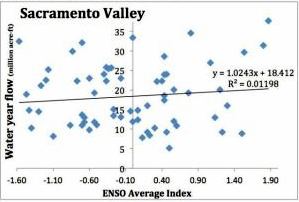 Figure 1. Conditions under El Niño and the related Southern Oscillation (ENSO) do not help predict annual stream flows for the Sacramento or San Joaquin river basins. ENSO index plotted here is average of December-April for each water year. Graphic by Jay Lund/UC Davis.

As Jay Lund of the UC Davis Center for Watershed Sciences pointed out at the summit, annual precipitation in the Sacramento Valley correlates only loosely with El Niño indices (See Figure 1). The only California flooding on record that might fairly be characterized as “biblical” in magnitude – the Great Flood of 1861-62 – resulted from “atmospheric river” conditions that appear to be largely independent of El Niño.

Another cautionary note is that an El Niño this winter almost certainly will not end California’s drought. Groundwater supplies in particular are too depleted to be fully replenished statewide in a single season.

An El Niño also might not add much to the record-low snowpack in the Sierra Nevada, where California receives much of its long-term water supply. At the summit, Michael Dettinger of the U.S. Geological Survey said both El Niño and global warming point toward warmer winter temperatures, raising the possibility of a “snow drought” even with a stormy winter.

Whether this winter’s storms hit California with torrential rain or barely dent the drought, Californians should prepare themselves for increased probabilities of locally heavy rain and snow, including the potential for flooding, debris flows and other damages from severe weather.

Local, state and federal officials are coordinating extensive preparations, but … sometimes it’s the curveball you don’t see coming that hits you in the head. The 14 speakers at the summit identified dozens of locations of specific concern in California, ranging from Camp Pendleton in the south to the Yuba and other Northern California rivers.

Other locations were noteworthy because they did not show up on these maps. For example, with California reservoirs at record lows, most regulated rivers in the state are unlikely to see major flooding downstream of their dams.

In contrast, several speakers voiced concern over areas ravaged by wildfire this past summer. The combination of severe fires, many on steep slopes, immediately preceding a strong El Niño creates potential for damaging slope failures, debris flow and debris-related impacts downslope and downriver.

On the bright side, disasters have a way of focusing attention on deferred improvements. As Stanford University economist Paul Romer coined it, “A crisis is a terrible thing to waste.”

An El Niño aura of urgency presents opportunities for strengthening California’s defenses against natural disasters, starting with mitigation of flood risk. The Federal Emergency Management Agency (FEMA) has designated more than 3,000 homes and other buildings in California as “repetitive loss properties,” meaning they have been repeatedly flooded and drawn multiple taxpayer payouts – at least $155 million in claims (Calil, et al. 2015). The agency reserves 15 percent of disaster payouts for flood mitigation, and puts a high priority on fixing repetitive loss problems after flooding.

The lower Cosumnes River south of Sacramento on Feb. 9, 2014 (left) and the next day following a storm. Photo by Carson Jeffres/UC Davis

El Niño also could spur additional political support and create opportunities for restoring floodplains and reconnecting them to their rivers. John Cain of American Rivers and John Stella of the Nature Conservancy showed the multiple benefits of “room for rivers” projects in California. Sections of old levees are strategically removed or set back so rivers can spill floodwaters onto undeveloped or farmed floodplains – lowering flood risk for communities, revitalizing riparian habitat and replenishing groundwater supplies.

Flooding is the most damaging and deadly natural disaster in the U.S. But history teaches that the most effective and most positive changes in flood management usually were planned in the absence of crisis, when skies were blue and feet were dry.

Now is the time to anticipate and prepare for the full range of challenges and opportunities that this winter’s El Niño may bring.

This entry was posted in Climate Change, El Niño, Planning and Management, Uncategorized and tagged Nicholas Pinter. Bookmark the permalink.

3 Responses to Rising to El Niño’s challenges – and opportunities