Urban water conservation for the birds

Posted on October 6, 2015 by UC Davis Center for Watershed Sciences

People who save water like to know their conserving is doing some good, such as sustaining economic growth, building municipal reserves for longer droughts or supporting the environment.

But many urban residents are concerned their water savings will go to uses they value less — such as supplying more wasteful customers, new urban development or agriculture — rather than meeting the needs of fish, waterbirds and other wildlife, which they value more. In fact, most household water conservation does free up water for other local users or eases State Water Project and Central Valley Project supplies for other thirsty cities or farms, rather than go directly to environmental protection.

For households interested in conserving water for environmental purposes, a bargain might be struck. The table below lays out how people might be motivated to use less water knowing that much of their savings would be dedicated to a favored environmental cause, such as supporting wildlife refuges.

Water Conservation for the Birds — Who Does What?

Wildlife refuges seem the most suitable place to begin such voluntary environmental water transactions. Water management for refuges is generally more structured and precise than for fish and have more developed assessments of how their water use affects wildlife. Refuges also are better tied into the water supply system, making it easier to move water to wetlands most in need. 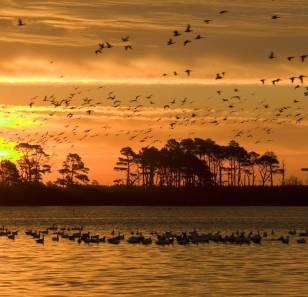 Such a program would better define and publicize the ties between local water use and the health of California’s ecosystems. Once urban water customers see their conservation efforts making a difference, they will likely be motivated to make further savings.

If successful for wildlife refuges, it could be expanded to fish and other environmental purposes, creating wildlife and recreational assets and empowering environmental water management.  We could make water conservation for the birds, and for the fish.

Jay Lund is a professor of civil and environmental engineering and director of the Center for Watershed Sciences at UC Davis.

10 Responses to Urban water conservation for the birds