Ten ways the feds can help ease drought in the West

Posted on May 27, 2015 by UC Davis Center for Watershed Sciences 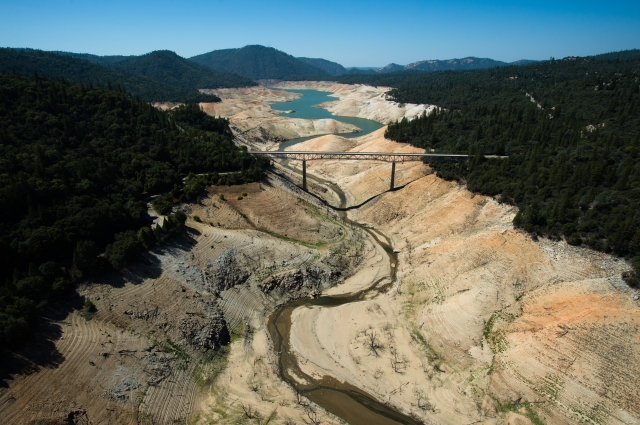 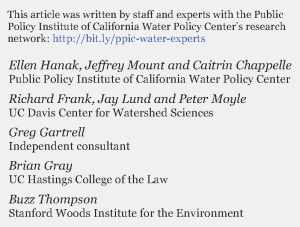 Since the onset of California’s drought emergency 16 months ago, federal agencies and Congress have been seeking to help the state through funding and new and existing legislation.

Here are 10 recommendations for new federal actions. Although many focus on California, they are relevant to other western states facing similar challenges. Because droughts are a recurring — and increasingly likely — feature of the western American climate, we also address water management actions important for longer-term support of a healthy economy, society and environment.

Federal drought support for the near term 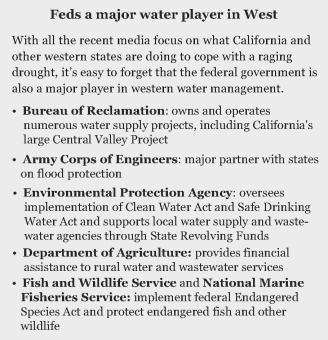 The drought has revealed different challenges in different sectors. (For a summary of drought impacts in California, click here.) Modest federal actions could support drought resilience in each of these sectors, in many cases without additional funds.

Rural communities: Some smaller, rural communities whose wells are running dry because of falling water tables need financial support for alternative sources, such as new wells, pipelines to other systems and, in the short-term, trucked-in water. Relaxation of federal funding rules could help.

(1)  Waive the 15-connection limit for federal support.
Safe Drinking Water State Revolving Funds are available to support such communities, but only if their water systems serve at least 15 connections, the threshold for regulation under the Safe Drinking Water Act. Many California communities rely on smaller systems and domestic wells where these funds cannot be used. Waiving the connection limit would likely be helpful in California and other western states.

Cities and farms: Federal action can lessen the socio-economic impacts of drought in urban and farm areas by enhancing the flexibility of water market and storage operations for federally owned water projects. Easing rules on allocation of federal matching grants could speed the process significantly.

(2)  Allow carry-over storage.
Many federal water projects in the West restrict the ability of contractors to carry reservoir water over into the next water year. For instance, the Central Valley Project (CVP) owns any water that is not taken out of reservoirs by March 1 (with the exception of San Luis Reservoir south of the Delta) [1]. This practice encourages potentially wasteful “use it or lose it” behavior and results in lower reservoir levels. During droughts, the U.S. Bureau of Reclamation should allow carryover. Those storing water for the next year would take on the risk of spillage if late-season rains make it necessary to release water for flood management. To minimize spillage, reservoir operators (including the Army Corps of Engineers) should experiment with real-time forecasts to inform flood releases.

(3)  Facilitate water trading.
Although federal projects such as the CVP accommodate water trading, the authorization process is often so cumbersome that it slows and even prevents trades. Legislation could direct the Secretary of the Interior to facilitate water transfers during drought emergencies and make available any excess infrastructure capacity for this purpose. For single-year transfers, legislation could also exempt trades of project water from the National Environmental Protection Act (NEPA), as California does under the California Environmental Quality Act (CEQA). As described below, water users could contribute to an ecosystem restoration fund in exchange for this regulatory flexibility. In California, it would be especially useful for CVP exchange and settlement contractors to develop long-term contingent contracts with more junior contractors, especially those lacking other water sources for permanent crops.

(4)  Facilitate the distribution of federal cost shares for local projects. Both cities and farms can build drought resilience through development of non-traditional water sources, such as capture of recycled wastewater and stormwater. Flexible federal cost-share programs — which allow agencies to directly fund states for certain purposes (for example, capture of recycled water and stormwater, groundwater recharge and smart meters) — would speed distribution of federal matching funds by allowing states to directly apply for them. In California, the federal government could usefully support drought-resiliency projects by directing CALFED funds to cost-share on projects supported by state bond money.

Ecosystems: In California — and elsewhere in the West — more deliberate approaches are needed for environmental stewardship during droughts. This includes actions that safeguard species and help fund these efforts. Federal land and water resources can also contribute to these actions.

(5) Develop and implement a drought biodiversity strategy.
Along with the state, the federal government could support development of a biodiversity plan that guides federal and state actions. The Australians made great strides in ecosystem management by taking this route during their decade-long Millennium Drought. Such a strategy should include:

a.  Identifying aquatic refuges for at-risk species, with an initial focus on public lands for immediate special management; work with NGOs to identify and acquire refuges and water rights on private lands
b.  Identifying investments for conserving cold water, particularly in federal reservoirs
c.  Identifying and buying emergency water supplies for in-stream flows and wildlife refuges
d.  Acquiring water rights for the environment and giving water managers the flexibility to engage in short-term trades of this water
e.  Designating watersheds rich in native species as high priorities for conservation, especially those with spring water sources
f.  Building conservation facilities or repurposing existing hatcheries to rescue fishes whose habitat has disappeared [2].
g. Fostering a “Delta Science Center” for government and academic scientific work on the Sacramento-San Joaquin Delta — similar to federal science efforts for the Chesapeake Bay and the Great Lakes — with objectives that include improvement of the region’s resilience to drought

(6)  Augment ecosystem restoration funds to build drought resilience.
Mindful of the need for any new federal funding proposal to identify a funding source, we propose the expansion of the ecosystem restoration fund model now used for the CVP. The project charges an ecosystem restoration fee of approximately $10 for irrigation users and $20 for municipal and industrial (M&I) users for each acre-foot of water delivered. During droughts, revenue collection would fall with deliveries, but the government could borrow against future revenues. This fund could also be augmented with a surcharge based on the fixed M&I rate or a percentage of the water price on transfers that use federal facilities or benefit from NEPA exemptions on short-term transfers proposed above. Such a small surcharge would amount to a minor price compared with the costs of water traded during California’s current drought. Finally, when environmental-flow regulations are relaxed during droughts for the benefit of urban and farm water users, those users could be charged for this water — similar to a market transaction — and the proceeds could go to this restoration fund [3].

(7)  Speed the ability for emergency listings of species threatened with extinction.
Numerous species not already listed under the Endangered Species Act are at risk, but the U.S. Fish and Wildlife Service (USFWS) does not have the resources or procedures to list them. Part of the problem is that the agency depends almost entirely on its own in-house work for this purpose, even when scientifically rigorous analyses are available from state fish and wildlife agencies and other sources. USFWS could be required to supplement its own work with studies by other agencies to create emergency listing packages.

(8)  Direct expertise and investments toward information systems.
U.S. Geological Survey and National Weather Service expertise and programs should be reinforced and directed toward (a) helping states improve gauging and modeling for water allocation and use, (b) investments in new technology to improve water-use measurement and accounting — such as metering and satellite remote-sensing for agricultural water use — and (c) groundwater modeling to expedite implementation of California’s new groundwater management law.

The above actions would work within existing institutional frameworks to improve the capacity of water systems to cope with droughts. As the U.S. Bureau of Reclamation’s study for the Colorado River basin and other studies show [4], water scarcity is expected to become increasingly common in the West. Institutional changes can increase the capacity to support the economy, society and environment.

(9)  Create an Independent System Operator (ISO) for water.
California in particular would benefit from creating an ISO for water — similar to the one for the state’s energy system. This would involve merging the federal and state water projects and operating them as a single public utility, with an ISO overseeing overall grid operations. The federal and state governments could seed the foundation of an ISO by charging it first with facilitating voluntary water marketing [5].

(10)  Promote regional integrated water management. Federal and state governments recognize the value of more coordinated, integrated water management to achieve multiple benefits, such as managing floodplains to simultaneously reduce flood risk, improve habitat and recharge aquifers. But an institutional framework is needed to truly coordinate the actions of the numerous federal, state and local agencies involved in water management. A promising approach is to organize by hydrologic regions or large watersheds. A law similar to the federal Coastal Zone Management Act would empower states to develop integrated watershed plans that federal agencies would then follow. This structure could be useful for more effectively addressing a host of challenges in managing water supply, water quality, drought, floods and ecosystems [6].

California’s drought highlights challenges facing water managers throughout the West. The challenges are likely to increase with a growing population and changing climate. Modest federal investments and policy changes can help reduce the economic, social and environmental impacts of the current drought. These same actions, along with long-term improvements in integrated water management and water trading, can help California and other western states prepare for inevitable future droughts.