Posted on November 7, 2012 by UC Davis Center for Watershed Sciences

Joshua Viers is an avid hunter of wild pigs, as shown here in Mendocino County in January 2012. Photo by Dan Schroeder 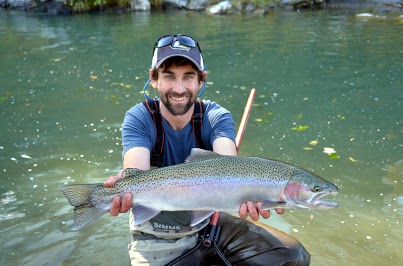 Jacob Katz lands a lunker steelhead on the Trinity River in November 2011. Photo by Carson Jeffres

The California Department of Fish and Game is one of the few state agencies with an inherently likable name. Bent fishing rods come to mind. Fishing and hunting permits are tickets to outdoor adventure and family bonding, and a license to literally bring home the bacon.

It’s no surprise then that Gov. Jerry Brown set the fur flying earlier this fall when he signed a bill replacing “Game” with “Wildlife” in the agency’s time-honored name. The California Association for Recreational Fishing, among other sporting groups, say the governor and Legislature threw hunters and anglers under the pickup. They view the name change as a capitulation to urban environmental and animal-rights activists, bent on supplanting the department’s traditional focus on hunting and fishing.

Some environmentalists say the name change, which takes effect Jan. 1, will help the department move away from practices that favor “hook-and-bullet” interests at the expense of non-game species – those not hunted for sport or food.

In truth, the department’s logo makeover is neither victory nor defeat for either side. Rather, it reflects a long-term and ongoing expansion in the department’s stewardship responsibilities for California’s natural resources.

The broadening mission has multiple causes. They range from California’s growing urbanization to increasing complexity and controversy in its ecosystems, advances in environmental science, court environmental rulings, and climate change. For more than 20 years, these and other factors have steadily nudged state fish and game managers toward an “ecosystem” approach that benefits a wider range of species and resource users, from license-paying hunters to birdwatchers.

Ecosystem-based management recognizes a broad array of interactions within biological communities, including hunting, fishing and other human activities. The approach is consistent with the department’s mission statement: “To manage California’s diverse fish, wildlife, and plant resources, and the habitats upon which they depend, for their ecological values and for their use and enjoyment by the public.”

In addition to issuing licenses and enforcing hunting and fishing regulations, the department rears trout in hatcheries, stocks fish in lakes and streams, fights poaching, manages state preserves and oversees habitat preservation efforts, among other duties. The new law does not change the name of the California Fish and Game Commission, which adopts hunting and sport fishing regulations and sets license fees.

Some department policies are at odds with best science and more holistic stewardship. For example, the use of lead shot – the traditional favorite load for many hunters – is still allowed for some game species such as doves and rabbits, but not other game as it poisons other wildlife. Also, the department’s 80-year-old practice of planting hatchery trout in historically fishless alpine lakes has contributed to the decline of native frogs and other wildlife. Money spent on the expensive aerial drops of fingerlings could instead go toward increasing fishing opportunities in more accessible, lower-altitude lakes and streams.

The legislation that triggers the name change, AB 2402 by Assemblyman Jared Huffman, also strengthens the department’s use of science in developing policies that protect entire ecosystems, instead of individual species.

The department’s involvement in the restoration of the Cosumnes River near Sacramento is a clear and successful example of broad benefits from science-based ecosystem management.

Since 1997, state fish and game officials have collaborated with neighboring landowners to re-establish seasonal floodplain habitat for threatened salmon and other species. The department, the Nature Conservancy and some ranchers stitched together various land parcels to form the Cosumnes River Preserve. The arrangement paved the way for UC Davis researchers to show how ecological restoration can achieve multiple wins for native fish and wildlife, for water management and for agriculture.

Most of California’s floodplains have been isolated behind levees, which were built to protect homes and crops from inundation. Before levees were built, winter and spring floods in the Central Valley swept young, ocean-bound salmon onto floodplains, where they found plentiful food, slow water, and few predators. As the floodplains drained, the fish would return to the river, well nourished and fit for their strenuous migration to the Pacific Ocean.

Fish and Game’s involvement in the Cosumnes River research has given its managers, and other resource agencies, practical, science-based tools need to create habitat in floodplains elsewhere in the Central Valley and in the Sacramento-San Joaquin Delta. Already, department managers are using the research to support ecosystem restoration efforts in the Yolo Bypass and the San Joaquin River.

Such efforts will give the department more than new uniform patches and letterheads to show next year when the agency officially becomes the “California Department of Fish and Wildlife.”

Moyle P, Crain PK, Whitener K. 2007. Patterns In The Use Of A Restored California Floodplain By Native And Alien Fishes. San Francisco Estuary and Watershed Science. 5(3)

This entry was posted in Uncategorized and tagged California Department of Fish and Game, ecosystem, Jacob Katz, Joshua Viers. Bookmark the permalink.