Managing for multiple stressors in the Delta

An example of a stressor on the Delta: The Chinese mitten crab was introduced to California in the early 1990s. They are considered a nuisance in the Delta where they may harm recovery efforts of endangered species and clog water pumps.

Across California, native fish populations are in sharp decline, despite decades of well-intentioned efforts to reverse the effects of harmful water and land management policies (Hanak et al., 2011). As more fish species have been listed under the federal and state Endangered Species Acts (ESA), most efforts have focused on piecemeal, crisis-management approaches for individual listed species. These efforts have failed to protect the native fish and are spurring growing conflicts with water supply and flood management projects.

These conflicts are most intense for the Sacramento-San Joaquin Delta, a major hub in California’s statewide water supply network and the largest, most ecologically significant estuary on the Pacific coast (Lund et al., 2010).  Numerous analyses of the Delta’s environmental woes come to a common conclusion: The widespread declines in native fish that depend on the Delta are caused by many factors, including water diversions, alteration of flows, loss of habitat, discharges of contaminants, over-reliance on hatcheries, and the spread of invasive species (Lund et al. 2011a, Herbold and Moyle 1989, Feyrer and Healey 2003, Moyle and Bennett 2008, Healey et al. 2008, Interagency Ecological Program 2010; Delta Independent Science Board 2011). 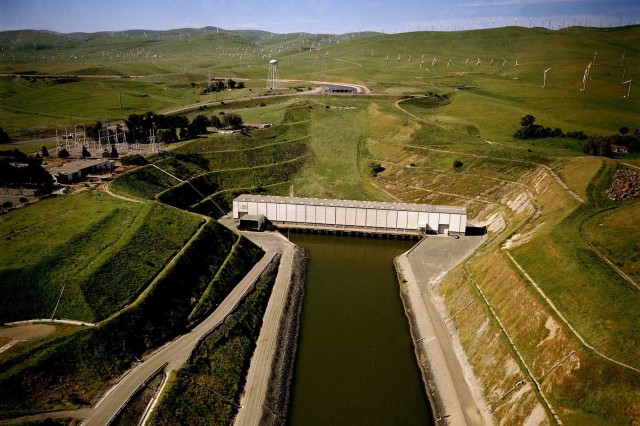 Water diversions are another stressor. The Harvey O. Banks pumping plant is the first pumping plant for the California Aqueduct and the South Bay Aqueduct, diverting water from the Delta.

To address these problems, the state and federal governments must redefine their water management strategy to create a “reconciled” Delta, in which estuarine function is improved for the benefit of a wide range of desirable species and environmental services. Such a strategy must address the multiple sources of stress to the system, while recognizing the irreversible physical and biological alterations caused by land and water development and invasive species over the last 160 years (Lund et al. 2011b).

The good news is that the need for such an approach is increasingly acknowledged, as reflected in the on-going development of the Bay Delta Conservation Program’s multi-species habitat conservation plan and the Delta Stewardship Council’s Delta Plan (Snow 2010, Delta Stewardship Council 2011).  But there remains considerable lack of clarity on how to effectively address multiple ecosystem stressors from scientific, economic, institutional, and funding standpoints.

Science:  The scientific basis for implementing a multiple stressor approach will always be contentious.  Ideally, we could identify the actions with the most potential to improve ecosystem functions.  But most biological research has focused on the role of individual stressors in species declines, such as ammonium, flow diversions, or striped bass predation (Moyle and Bennett 2011). Much less is known about which actions will be most effective at improving overall conditions in what is now a highly altered ecosystem (Moyle et al. 2010).

The first task is to answer two questions: what are realistic ecosystem goals for a reconciled Delta, and which desirable species should the system aim to promote?  Then, given the urgency of making policy headway, some first-cut decisions on priority actions will have to be made, acknowledging that it is impossible to address the problem in its full scientific complexity and that it will be necessary to refine and adapt approaches over time as knowledge improves.

Economics. Potential biological effectiveness should not be the only criterion for choosing actions to reduce stressors.  The economic costs of the reconciliation program also must be evaluated to ensure that the overall strategy includes actions most likely to be most cost-effective. Reducing some stressors will create other benefits.  For instance, reducing contaminants may not only improve conditions for native fish species, but also reduce drinking water treatment costs for urban users.

Institutions:  Although a multiple stressors approach is compatible with the administration of both the federal and state ESAs, most ESA actions have focused on single sources of stress related to an entity requiring a “take” permit (which allows some water users to kill or harm a specified number of a protected species or alter their habitat as an unavoidable incident to their project operations).  In the case of the Delta, the regulated parties rely on water exported through the south Delta pumps.  The fisheries agencies that administer the ESAs often point to difficulties in implementing a multiple stressors approach because they cannot regulate actions that do not require such a permit.  Thus, new administrative approaches will be needed.

One promising direction is to develop processes that coordinate multiple regulatory authorities. In addition to the Endangered Species Acts, numerous other federal and state laws can help address sources of environmental stress: the federal Clean Water Act and its state counterpart (the Porter-Cologne Act), the federal Flood Control Act, and the California Fish and Game Code.  Another promising, and potentially complementary, approach would be to require a broader set of parties whose actions have contributed to the decline of one or more species to participate in the solution to the problem.  The Delta Plan, now under development, may take this approach.  In either case, the goal should not only be to reach a wider set of actions, but to coordinate the permitting process to minimize inconsistent requirements and untimely delays.  Such coordination is a major institutional challenge.

Funding:  New funding mechanisms will need to reflect the many sources of responsibility for ecosystem decline, even if a more limited set of actions is chosen to make environmental management more cost-effective. Under a “stressors pays” principle, all parties whose actions are responsible for ecosystem changes that harm native species should contribute to recovery, whether or not those actions are identified as priorities for immediate action. Financial and in-kind contributions will likely be appropriate from numerous parties, including water users, pollutant dischargers, land developers, hatcheries, and fisheries.  The fourth draft of the Delta Plan identifies the “stressor pays” principle for funding operations of the new governance structure for the Delta; this principle also should extend to cover ecosystem investments.

Adaptive management:  Given the uncertainties in the science, it will be impossible to get it right the first time.  Effective means of improving and adapting management strategies will be needed to incorporate new information about species responses.  Adaptive management is easier said than done.  We will provide some thoughts on how this might work better in the Delta in a future blog entry.

1 Response to Managing for multiple stressors in the Delta