ENSO the Drought Strikes Back! The 2016 Drought so far – March 1

Posted on February 28, 2016 by UC Davis Center for Watershed Sciences 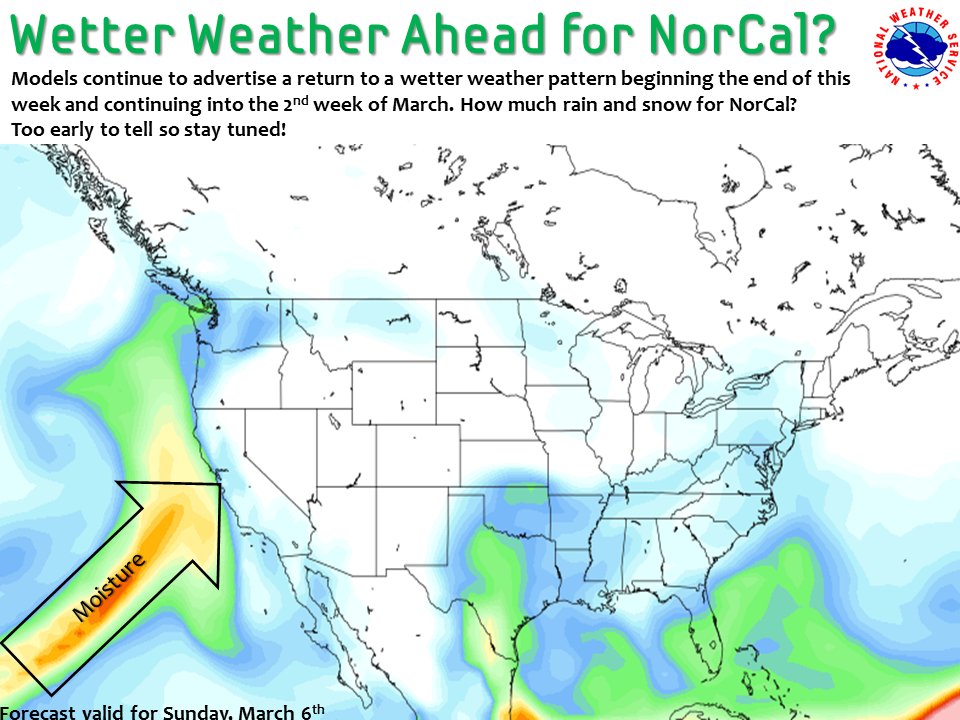 February 2016 has been dry, despite El Nino-besotted promises of aqueous abundance. There is sometimes a difference between climatic conditions and hydrologic reality (and economic reality).

Annual precipitation and snowpack are now about average or a little less. Fortunately, the largest reservoirs continue to fill slowly, relative to previous drought years, with still about 6 million acre ft of surface water storage deficit for this time of year. Groundwater will be recharging, as it should this time of year in most places, but we still sit atop a large dry hole.

California remains in a drought, with little doubt. So far, El Nino has brought us largely average precipitation and snowpack. Overall 2016 drought conditions are likely to remain unclear until March, but 2016 will be less dry than 2014 or 2015, but not a drought-buster.

Here are some recent highlights, with links from the California Department of Water Resources’ California Data Exchange Center (CDEC) at http://cdec.water.ca.gov.

Major reservoirs in California continue to fill much more than last year, but overall remain substantially less than the historical average for this time of year. Some reservoirs, such as Folsom, have filled their water supply levels and are encroached into their normally-reserved flood storage capacity. But California’s reservoir storage remains about 6 maf (about 6 full Folsom reservoirs) less than average for this time of year. Groundwater statewide will be making some recovery but will be a long way from recovering from drought in many places.

The drought by 2015 depleted total storage in California by about 22 maf cumulatively or nearly a year’s worth of water use in agriculture. Soil moisture conditions were also unusually dry following 2015, diverting and delaying some runoff from early storms. Storage is recovering during this wet season, but still has a good bit to go, probably 17-20 maf of drought storage drawdown remains. 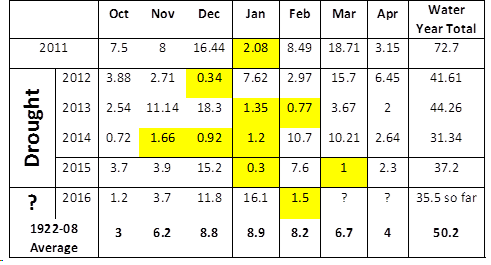 El Nino apparently is giving us about average conditions. Far better than the last four years. But no drought-buster. It will be hard for the drought to be over for much of California in 2016, but it should be better than 2015 and 2014.

Much better than the last four years, but still a drought. A dry February has set back an already likely-to-be-long drought recovery. We are looking at another drought year, with lingering drought effects even if the next two months are quite wet.

Where did El Nino go? Climatologically he is still there, but the hoped-for hydrologic abundance has not yet happened.  Fortunately, the forecast is hopeful for early March.

Jay Lund is Director of the UC Davis Center for Watershed Sciences and Professor of Civil and Environmental Engineering at UC Davis.

5 Responses to ENSO the Drought Strikes Back! The 2016 Drought so far – March 1